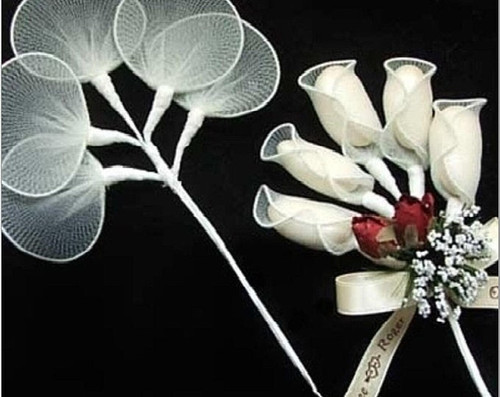 The History and Meaning Behind Jordan Almonds

While it is possible to simply treat Jordan Almonds as a pretty candy to add to a dessert table, they do hold meaning for some couples, too. These dainty candies date back to 1350, with literary references during that time.

"For many of our clients who want to honor their heritage, we see it most with Greek or Italians traditionally cultures, Jordan Almonds at Greek weddings seem to be rooted in tradition," says Battaglia. "We’ve heard many reasons to incorporate these little treats into a couple’s special day, but ultimately they are symbolic of well wishes as the couple and their families celebrate the beginning of their new life together." As a Greek tradition, Jordan Almonds may also be referred to as Koufeta.

Emmett also notes that the candy coating around the raw almond symbolizes sweetening the sometimes bitterness of life, as well as sending hopes and wishes of a sweet future. "Italians traditionally package these candied egg shape sugar coated almonds in bunches of five filled with almonds represents wishes of health, wealth, happiness, fertility, and longevity," she says. For some, the five almonds for each guest also symbolize a number that can’t be divided into two, just like the bond formed by a newly married couple.

As for the shape? Emmett notes the ovular shape of the almond can represent fertility as well. Overall, it’s all about offering a small symbol to usher in a bright, happy future for the couple on their special day.

You may return most new, unopened items within 30 days of delivery for a full refund. We'll also pay the return shipping costs if the return is a result of our error (you received an incorrect or defective item, etc.).

You should expect to receive your refund within four weeks of giving your package to the return shipper, however, in many cases you will receive a refund more quickly. This time period includes the transit time for us to receive your return from the shipper (5 to 10 business days), the time it takes us to process your return once we receive it (3 to 5 business days), and the time it takes your bank to process our refund request (5 to 10 business days).

If you need to return an item, simply login to your account, view the order using the "Complete Orders" link under the My Account menu and click the Return Item(s) button. We'll notify you via e-mail of your refund once we've received and processed the returned item.

We can ship to virtually any address in the world. Note that there are restrictions on some products, and some products cannot be shipped to international destinations.

Please also note that the shipping rates for many items we sell are weight-based. The weight of any such item can be found on its detail page. To reflect the policies of the shipping companies we use, all weights will be rounded up to the next full pound.